has chased his dreams since he was ten years old, after making his first film. Soon it was even featured in the News Herald titled, “Geauga Boy Makes Movie”. After this Cole knew the video production world was the atmosphere he loved to work in.

Cole grew up in small town Chardon, Ohio. Ever since his first film, he continued to make films and act, learning more about the entertainment industry. He acted on stage, in films, television, print, and performed improv in Ohio. He then left that small town to pursue and hone in on his craft.

Cole is an honors graduate of Ringling College of Art & Design (in Sarasota, FL.), with a B.F.A. in Film, and he completed the Motion Capture Production & Experimentation grad course at the Ohio State University. He then went on to work on film productions and as an editor and producer with a production company. Cole's a director and a versatile filmmaker, working on a variety of productions, with much experience in the entertainment industry, both performing and creating both promotional and narrative content. Working with creative teams on creating the best product (whether promotional or narrative) is what he loves to do and lead. Cole is all about story, vision, and performance.

Currently, Cole now works as a Director of Community Media Outreach. He is a creative with many dreams and encourages others to do what they love to do and help change the world. 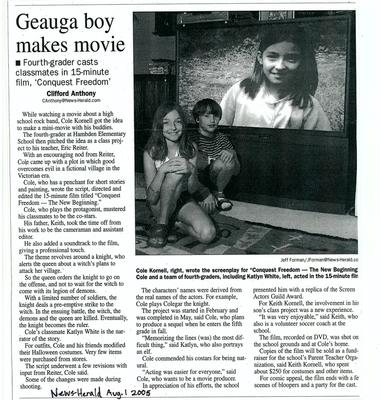 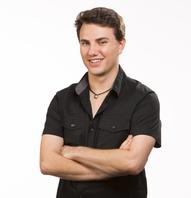 Where it all started

Thanks for checking me out!

Newspaper from 2005 entitled, "Geauga boy makes movie". This inked the papers after Cole wrote, directed, and acted in his first film, Conquest Freedom, about a knight named Colagorn (played by Cole) who defends his village called Taragorn from an evil witch and her demons. Even at a young age Cole had grand ideas and wasn't afraid to accomplish them.